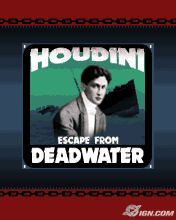 Paul Farley, the managing director of Tag Games, said, “The Houdini license is not only a great fit in terms of the titles theme and game-play but also comes at an opportune time with Houdini's controversial demise is back in the news.”

Houdini: Escape From Dead Water is scheduled for release in Q3 2007. The title will be available from all major North American carriers.

Dead Water was released in Europe in early 2007, to widespread critical acclaim. The game was awarded 81% from MobileGameFaqs.com, 8/10 from MidletReview.com and prompted MobGames.tv to proclaim, “With brand new original innovative game-play, designed specifically for your mobile phone, could this be a glimpse of what's to come from Tag Games and for the industry as a whole?”

Tag Games has a number of games in development to follow Houdini: Escape from Dead Water. These include Rock’n’Roll - an innovative casual action/puzzle title that features unique one button game-play and Granny In Paradise, which brings Sandlot Games' popular casual PC franchise to mobile for the very first time.

“We're delighted to be working with Oasys to release Houdini: Escape From Dead Water to the American market,” says Farley.“We've had a great response to the game throughout Europe and we believe its combination of simple, fun gameplay and the unique setting of a sinking ship– with the constantly rising water, will prove just as popular with an American audience.”

Oasys Mobile CEO, Doug Dyer commented, “We are excited about our partnership with Tag Games to release Houdini: Escape From Dead Water. We believe, together, we will release a successful and compelling game with large appeal in the American market.”
Written by John Cox at 7:30 AM

Email ThisBlogThis!Share to TwitterShare to FacebookShare to Pinterest
Tags: Merchandise, Toys and games