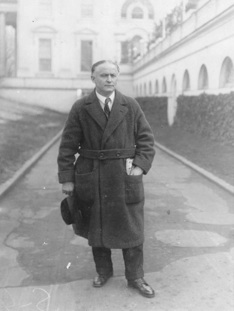 A recent eBay auction offered up what it claims is the last photo taken of Harry Houdini. The auction describes the photo as taken in a “University area in Canada” shortly before Houdini gave a lecture there. The description goes on to explain that Houdini was then “beaten by a group of students in his dressing room” and died shortly after.

Considering Houdini was not “beaten by a group of students” (the perpetrator was a single student from McGill University and generally considered a freak accident), I’m not sure I’m willing to buy all the auction’s claims about this pic.

Also, having been to McGill, I don’t recall any buildings in that style. To my eye, that looks a lot like the White House in the background, suggesting this was possibly taken during Houdini’s trip to D.C. to testify on a bill outlawing fortune telling (but now I’m the one who’s just guessing).

Still, it’s a nice pic, and one I can’t recalling seeing elsewhere.