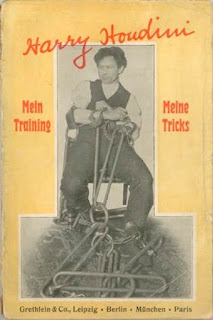 A copy of Houdini’s first German pitchbook Mein Training and Meine Tricks shot past its auction estimate of $300 to $400 and sold for $1,400 on eBay.

At 80 pages, Mein Training is substantially longer than most of Houdini’s pitchbooks. In fact, it could be considered a proper Houdini book in the vein of Handcuff Secrets.

This eBay copy came from the library of the famous Mentalist Joseph Dunninger, a close personal friend of Houdini who later served as technical advisor on the 1953 Paramount movie HOUDINI.
Written by John Cox at 6:49 PM