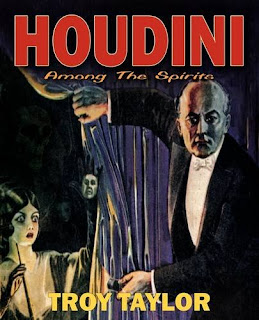 Houdini Among the Spirits by Troy Taylor examines the life, death and mysterious afterlife of the famed illusionist and escape artist. Not merely a biography of Houdini, this is a revealing look at Houdini’s fascination with the spirit world, starting with his own days as a fraudulent medium with a traveling circus and continuing on to his exposures of fake Spiritualists, his psychical investigations, his “death pact” with fellow magicians and the legendary Houdini Séances, which are still being held today.

Included in the book are chapters on Houdini's early life; his rise to stardom; his time as a Spiritualist with a traveling circus; his brushes with death; the creation of his death-defying escapes; his obsession with the death of his mother and contact with her on the other side; his strange and haunted friendship with Spiritualist and author Sir Arthur Conan Doyle; his Spiritualist-debunking stage show; his investigations of mediums, including the famous "Margery"; the eerie premonitions of his death; the Houdini Séances; and much, much more!


This post first appeared on Houdini Lives.
Written by John Cox at 11:13 AM