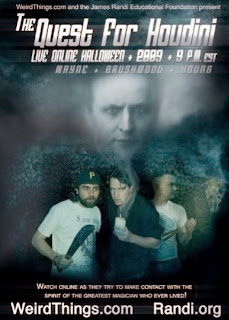 PRESS RELEASE: This Halloween, The James Randi Educational Foundation and WeirdThings.com present a never-before-attempted experiment. In front of a live internet audience, a group of prominent skeptics and magicians will try to make contact with the spirit of Harry Houdini, the world’s most famous magician and challenger of the supernatural.

World famous magician and skeptic James Randi will oversee the seance and will help supervise the attempt to communicate.

The seance will consist of several tests for attempted communication. Words and images provided by prominent magicians and skeptics and held by James Randi will be attempted to be divined through various supernatural means including Ouija boards, automatic writing and spirit photography.

Rehearsals for the event will be held on Friday October 30th at 1 PM and Saturday at 2 PM at the Isaac Asimov Memorial Library. For press access contact Justin at 954-892-5665.
Written by John Cox at 5:13 PM