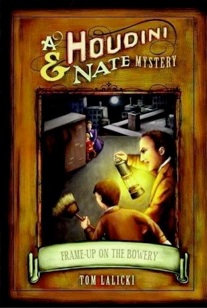 Frame-Up On The Bowery

Set in 1911, Frame-Up On The Bowery finds young sleuth Nate Fuller, along with his famous mentor Harry Houdini, out to solve a brutal Yuletide murder that shocks the denizens of New York City. After a mutual friend is wrongly accused of being the killer, Houdini and Nate are certain their friend has been framed. But why? By whom? And how can they save him? Old New York’s acclaimed detecting duo brave the rough-and-tumble streets of the Lower East Side, where colorful, conniving characters abound, and the only thing certain is danger every step of the way.

Frame-Up On The Bowery can be purchased on Amazon.com

. A paperback edition of the first book in the series, Danger in the Dark

, will be released next year.