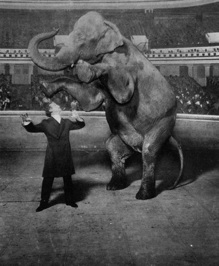 One of Houdini’s most famous illusions was his Vanishing Elephant. Houdini introduced the effect as part of the Cheer Up review at the New York Hippodrome in 1918. He later revived it with a smaller elephant for live appearances at the Time Square Theater to promote his film, The Man From Beyond.

But for all its notoriety, precious little is known about exactly how Houdini’s Elephant Vanish looked and worked. While there's an excellent book devoted in part to the effect, Hiding the Elephant

by Jim Steinmeyer, there is only one known photo of Houdini with his vanishing elephant (Jennie), taken by the White Studio for publicity purposes. But this photo does not reveal the cabinet, which is key to the effect.

But apparently there ARE more photos. Or at least there were.

In his own study, Notes on the Vanishing Elephant, Houdini expert Patrick Culliton says six photos of the illusion were published in the New York World in 1918 (he does not provide the exact date). Four years earlier the New York World Sunday Magazine featured the only known photo of Houdini’s Walking Through a Brick Wall illusion, in color no less!

Unfortunately, no collector has yet been able to turn up a copy of the World’s Vanishing Elephant issue. In fact, Patrick says this particular issue is the ONLY one missing from the microfilm archives.

Is it possible the photos revealed a little too much and Houdini (or Jim Collins) scrubbed the issue from the files?

UPDATE: Joe Notaro at HHCE recently checked out a complete file of New York World Sunday Magazine and his findings are not encouraging. Read here.