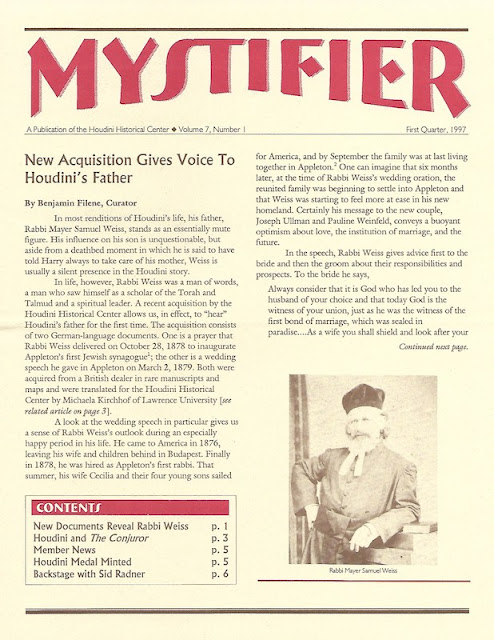 The HHC began the new year with a fresh redesign of the Mystifier. The First Quarter 1997 issue then kicks off with an announcement of a major new acquisition:

A recent acquisition by the Houdini Historical Center allows us, in effect, to "hear" Houdini's father for the first time. The acquisition consists of two German-language documents, One is a prayer that Rabbi Weiss delivered on October 28, 1987 to inaugurate Appleton's first Jewish synagogue; the other is a wedding speech he gave in Appleton on March 2, 1879. Both were acquired from a British dealer in rare manuscripts and maps and were translated for the Houdini Historical Center by Michaela Kirchhof of Lawrence University.


A short article about translator Michaela Kirchhof follows. Kirchhof observes that Rabbi Weiss "certainly liked to hear himself talk" and that his German grammar was "highly idiosyncratic and downright wrong at times." Like father like son?

The newsletter continues with an article by David Ben about Houdini's influence on his own performance character, "The Conjurer." A report on a special Houdini medal minted by the Jewish-American Hall of Fame follows. And among the new members we see Dorothy Dietrich and Jon Oliver. 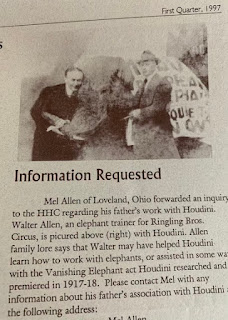 Page 5 includes a real gem. It's a photo of Houdini with a small elephant and Ringing Bros. trainer Walter Allen (right). The photo belongs to Allen's son, Mel, who comes seeking information on his father and Houdini. The article states: "Allen family lore says that Walter may have helped Houdini learn how to work with elephants, or assisted in some way with the Vanishing Elephant act."

Houdini did use two smaller Ringling elephants for his Elephant Vanish at the Times Square Theater in 1922. In fact, he paraded them down Broadway on opening day (April 2). So are we seeing here the only known photo of Houdini with either Fannie or Lucy?


In "Backstage with Sid Radner", Sid reports on the March 30 airing of Houdini People Came to See Him Die on the Discovery Channel. He reports that Ken Silverman's Houdini!!! The Career of Ehrich Weiss has received great reviews in both the Wall Street Journal and New York Times, and is currently into its fourth printing. Sid also reports the sad news that Marie Blood's husband Forrest passed away on February 11. He then shares that he himself recently suffered a heart attack and underwent bypass surgery. (!) But he's home and recovering.

Sid then announces that the Goodspeed Opera House is readying a new Houdini musical to play September 24 to December 14, 1997. He ends the column with the prophetic: "Maybe all this Houdini activity will help us get a Houdini postage stamp..."