A new novel, Houdini’s Flight by Angelo Loukakis, has been released by Harper Collins in Australia. Description follows: 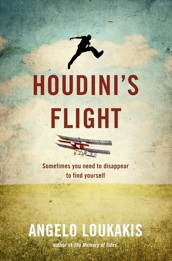 Terry Voulos is struggling. His marriage, his relationship with his son and his work prospects are shaky. He finds solace in the possibility of a new career as a magician, before a tragic accident sends him into exile, estranged from all that is familiar.

Hal Sargeson, a one-time magician and lifelong disciple of Harry Houdini, takes Terry under his wing. He begins to school Terry in the same arts of escape that the great Houdini used to thrill Australian audiences a hundred years earlier, but keeps to himself a knot that might have beaten even the master.

Terry is eventually brought to truths more disturbing than his present troubles, and to a moment when the healing power of magic is truly needed. Between Houdini′s example and Hal′s guidance, Terry learns much more than the routine illusions of the everyday magician.

HOUDINI′S FLIGHT is a moving and surprising story of finding meaning in the most unexpected places.