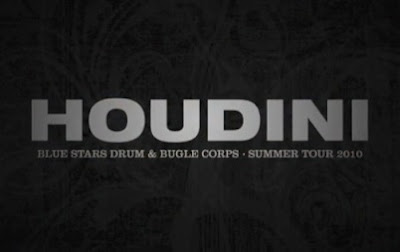 The La Crosse Blue Stars Drum and Bugle Corps will debut its 2010 show, Houdini, at Onalaska High School in Onalaska, WI on June 23, 2010.

This program tells the story of Houdini with contemporary classical compositions by Philip Glass and music from the movies The Illusionist and The Bucket List and the opera Nixon in China.

The Blue Stars are known for telling stories on the field such as the American factory during World War II and Tour de France. This year they have selected a much darker show in Houdini but hope to capture the story of the man who once had the greatest act on earth, said Brad Furlano, former Blue Stars drum major who is the corps’ executive director.

The color guard will use handcuffs and crates and wear straight jackets while spinning flags in their routine.

The concert will begin at 7 pm and is free to the public. The corps do ask that you bring a non-perishable food item to donate to the La Crosse Hunger Task Force.
Written by John Cox at 10:52 AM