Houdini model lifts off at last 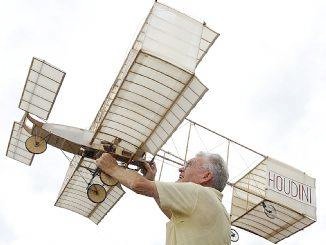 BACCHUS Marsh air enthusiast Gary Sunderland’s Voisin biplane has finally taken to the sky. After an unsuccessful attempt at Melton’s Centenary of Flight Airshow in March, the plane was airborne at the Twin Cities Model Aero Club meeting in Albury/Wodonga early last month.

The plane is a replica of Harry Houdini’s aircraft which took off from Diggers Rest 100 years ago.

And it appears Mr Sunderland encountered many of the problems experienced by Houdini back then.

“It was more difficult than I first imagined and certainly Harry Houdini and other pioneers of flying deserve our respect,” Mr Sunderland said.

“The model was persuaded to take to the sky and perform a number of circuits of the field and fly by the many spectators.

“Level flight proved to be the most difficult to achieve as it was unstable in pitch and wanted to dive.”

Mr Sutherland had previously flown the aircraft in early morning, calm weather at the Bacchus Marsh airstrip, but that was not witnessed by crowds.

He thanked friends and well-wishers for their encouragement.

By Liam McAleer
Moorabool Leader
Written by John Cox at 11:37 AM