Houdini is back in action at Six Flags 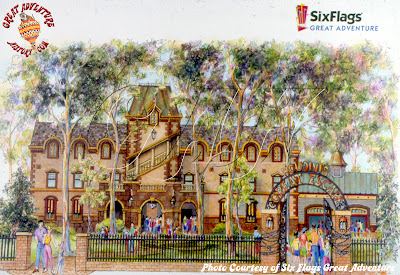 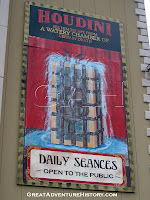 Queue
The queue weaves through Houdini's garden, which features several trees, shrubs, and an ornate fountain. The queue line is next to the park's Carousel, as well as the Dare Devil Dive SkyCoaster. Screams can be heard from the Dare Devil Dive while waiting in line for Houdini. The line stops in front of Houdini's house, which features posters advertising Houdini's magic tricks, as well as daily seances which are held in the house.

Preshow
After entering the house, guests come into Houdini's library, complete with faux candles and books. Margery, an unseen narrator, tells guests about Houdini and about their goal - to bring back the spirit of Houdini to the world of the living. She shows a film of Houdini so guests can concentrate on his image. Soon after the film ends, all the candles in the room blow out and Houdini's spirit begins to enter various objects in the room, including chains, gargoyles, and the Chinese Water Torture chamber. After making the candelabra in the front of the room move, Houdini's face appears on the mirror in the front of the room. The candles light themselves again and Margery congratulates guests on bringing back Houdini's spirit, and invites riders move on to Houdini's parlor, where the main ride takes place. 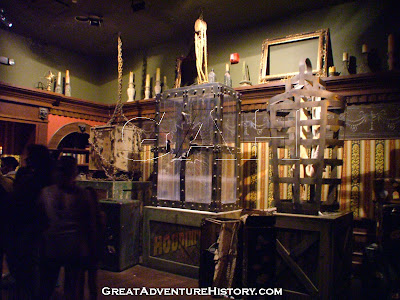 Ride
After sitting down in one of two sets of benches which face each other, the exit doors close and the lights dim. A crystal ball illuminates, showing Houdini's head inside the ball. He denounces Margery and other frauds who claim to bring Houdini back to the world of the living, since he claims he never left. In order to show you his power, he locks you in place with a set of magical keys (projected onto mirrors) and tells you he will show you his greatest illusion to date. The room begins to rotate, and the benches swing, leading guests At the climax of the ride, the room and benches stop so that riders should theoretically be upside down. Once the ride ends, Houdini unlocks riders from their position and allows them to leave the ride, forever believing in the power of Harry Houdini. 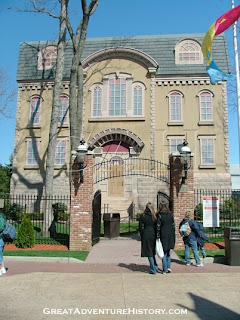 "Houdini's Great Escape" is a Mad House attraction, manufactured by Vekoma. The ride's benches, in reality, do not even rotate beyond 50 degrees, but they do rotate while the room spins to give the illusion of flipping. The themeing of the attraction was done by Showquest Studios. A near clone of the ride exists at Six Flags New England, called Houdini: The Great Escape, but it is inside of an opera house instead of a Victorian-style house.

Houdini was closed for safety modifications after a power failure in the park had trapped riders for a period of time. Modifications made the ride safer and it re-opened to the public.