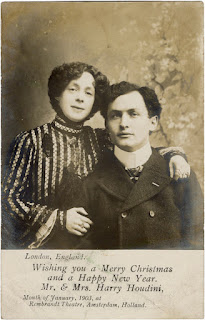 The Houdinis 1902 Christmas card--the earliest card that I'm aware of--sold today in Potter and Potter's "Winter Magic Auction" auction for a jolly $3,120 (including buyers premium). It's a beautiful and uncommon card with a terrific photo of the young Harry and Bess. It handily beat the auction estimate of $800 - $1,200.

Notice that Bess is wearing her famous Royal Crown Brooch in this photo. This pretty much closes the door on the idea that she received this as a gift from Russian royalty as the Houdinis sent out this card four months before they ever traveled to Russia.

The auction also included a few very nice Houdini movie related lots. One was comprised of a letter on Houdini Picture Corporation stationary and a terrific unpublished photo from The Man From Beyond from the Milbourne Christopher collection. It sold for $2,280. The other was a letter and stock certificate framed with a photo of Houdini and Bess with director Scott Sidney at Inceville in Los Angeles in 1915. It took $3,840. 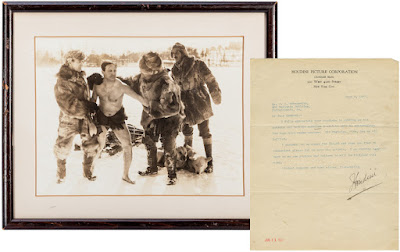 But the big ticket Houdini item was a locked book that Remigius Weiss used to expose the medium Henry Slade in 1882. Weiss later presented the book to Houdini who wrote about it in A Magician Among the Spirits. The auction lot included letters of provenance from Oscar Teale and Jack Flosso, whose father acquired the book from Joe Dunninger. The Houdini-Slade-Weiss Locked Book unlocked $12,000 (including premium). 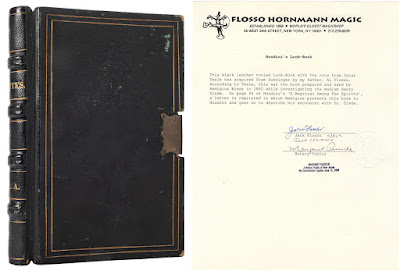 Congrats to the buyers.