Houdini at Chapel Hill (and in my home)

Here's my "Moses Buy" for 2019. This is an original 4-page flyer for Houdini's spirit lecture at the University of North Carolina in Chapel Hill on November 21, 1924. There's a lot to love here. 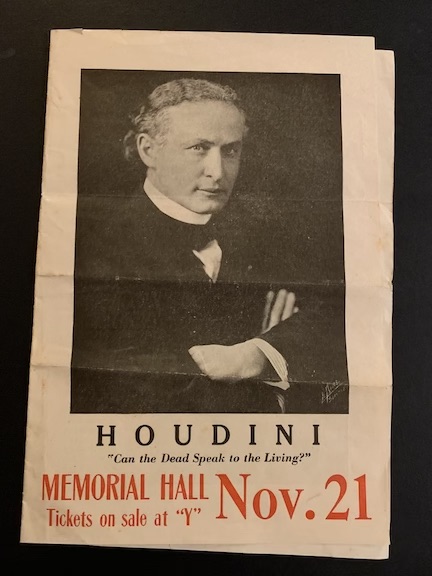 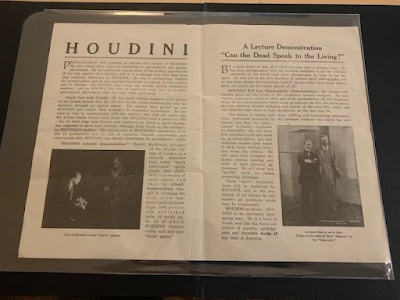 This Chapel Hill appearance was part of Houdini's second lecture tour of 1924. While I've seen a similar flyer for his first tour, I've never seen one from his second. This one has the new name for his talk, "Can the Dead Speak to the Living?", which was an improvement over "Fraudulent Spiritualistic Phenomena." This also has the address for the Alkahest Lyceum System in Atlanta on the back, so I'm wondering if this might have been unique to the South?

But what really thrills me is I know the identity of the Chapel Hill student who saved this. The eBay seller (blueridgeheritage) was kind enough to provide me with these details:

The name of the original owner was Joseph Franklin Neal (1903-1965). He was from Jefferson, NC and was a student at UNC Chapel Hill in the early-mid 1920s. The Houdini program was found in the attic of the old family house built in 1880. There were 2 UNC yearbooks from '24 and '25 and a few other UNC items. Most certainly Joseph went to the show and saved the program and brought it home. The folds looks like it was put in a back pocket. This is the ONLY one I have or have seen.


As to the lecture itself, it attracted a sell-out crowd of 1,500, and appears to have gone over very well. Houdini recorded in his diary: "College boys. Great audience. Gave me the college yell." Houdini also seemed to be in true form this night, as evidenced by the below account from The Daily Tar Heel:


Next week I will be wrapping up the blog for 2019 with a major historical post having to do with this same lecture tour. It's a story never before told, and it was no Chapel Hill! So watch for: The Chattanooga debacle.