Houdini and the Doctor reunite in STAR TALES

In the first season of Jodie Whittaker's Doctor Who, the Doctor name-checked Houdini, saying how she once spent a "wet weekend" with the escapist. Now Houdini and the Doctor are reunited in this clever collection of adventures pairing the Doctor with famous personalities.

‘Even though they’re gone from the world, they’re never gone from me.’ 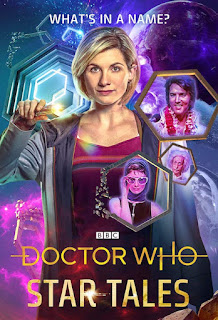 The Doctor is many things – curious, funny, brave, protective of her friends...and a shameless namedropper. While she and her companions battled aliens and travelled across the universe, the Doctor hinted at a host of previous, untold adventures with the great and the good: we discovered she got her sunglasses from Pythagoras (or was it Audrey Hepburn?); lent a mobile phone to Elvis; had an encounter with Amelia Earhart where she discovered that a pencil-thick spider web can stop a plane; had a 'wet weekend' with Harry Houdini, learning how to escape from chains underwater; and more.

In this collection of new stories, Star Tales takes you on a rip-roaring ride through history, from 500BC to the swinging 60s, going deeper into the Doctor's notorious name-dropping and revealing the truth behind these anecdotes.


The Houdini story is by Steve Cole and is called "Who-Dini?" It's narrated in part by a thinly disguised Dorothy Young ("Dorothy Smith"). While the story doesn't actually chronicle the aforementioned "wet weekend", it's a fun romp set in Chicago in 1926 and finds Harry and Bess interacting with two different Doctors. And it has a nice surprise ending.

Doctor Who: Star Tales is released today in the UK in hardcover and can be purchased at Amazon.co.uk and Amazon.com.