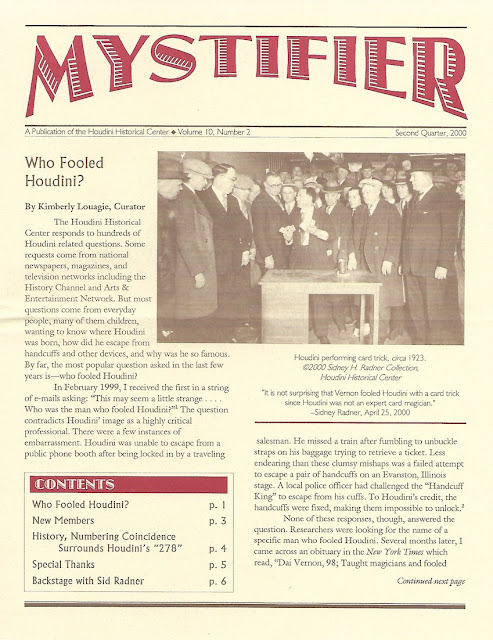 The second quarter 2000 Mystifier kicks off with an article by curator Kimberly Louagie about Dai Vernon. Louagie states that "by far the most popular question asked in the last few years is––who fooled Houdini?" (Really?) That man was, of course, Dai Vernon, "The Professor", who never had a good thing to say about Houdini himself. So we'll leave it at that!

The second major article of the newsletter is about the history of 278 by Dr. Morris Young. Young recalls his own visits to Houdini's brownstone, including being the participant in a Houdini radio seance broadcast from 278 by Long John Nebel. (Young dates this as 1944, but from what I find, the Nebel seance happened in 1971.)

In his time, Dr. Young was also a recognized expert in the use of mnemonics and codes, and he closes his article with this curious application of mnemonics to Houdini's address:

So motivated by Houdini's often expressed interest in mentalism, codes, cypher and coincidence, I became impelled to submit "278" to its phonetic numeral mnemonic implications. Suddenly, "278" resounded in my ears as "han(d)cuff" or alternatively, uncuff. In the system, numerals are given the sound of consonants. 2 equals N; 7 equals hard C or K; 8 equals F or PH, Trying out the system on "113" (the street number), I equals T or D or TH; 3 equals M. In making up words, vowels have no mnemonic value and may be used liberally. W, H and Y are "neuters". Accordingly, "278 W. 113" becomes "Uncuff We Tie Them", the address of the house.

In "Backstage with Sid Radner", Sid reports that S.A.M. president Harry Monti and past presidents George Schindler and Frank Daily visited the HHC following that year's S.A.M. national convention in Milwaukee. He then plugs the HHC website and museum shop. Sid also announces that the new Houdini Museum at the Venetian Casino in Las Vegas will be open by the time this newsletter arrives.

Sid closes with the story of how he fooled Dai Vernon twice in 1942 with a left-handed peek and one-handed bottom deal. Sid says, "Perhaps I should have billed myself as the 'gambling expert who fooled Vernon', but much of the general public didn't know who Vernon was." Mic drop.