Recently while scanning through some video tapes from the Manny Weltman collection, I spotted this image. The quality is poor and it only lasted a few frames, but it still knocked me out! That's because this appears to be the original title card for Houdini's 1909 film The Marvelous Exploits of Houdini in Paris. I've never seen this among any of the surviving fragments of that film. I love that it features the Statue of Liberty. 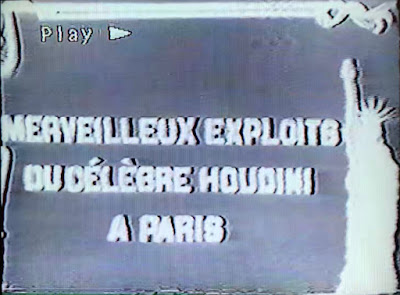 Houdini made Marvelous Exploits for Cinema Lux in Paris in 1909. This was his first foray into narrative film and it shows Houdini in his prime. With the discovery of this title card, I can now say with confidence that the complete film does exist; but in disassembled fragments of varying quality. Still, a restoration is possible.