The Magic Castle in Hollywood has officially relaunched their popular Houdini seance as The Houdini Séance Experience. The seance shut down in 2018 for a total retooling which is now complete. Member reservations are now being accepted for 2022. They've also offered a first look at the completely redesigned Houdini Seance Room (below). 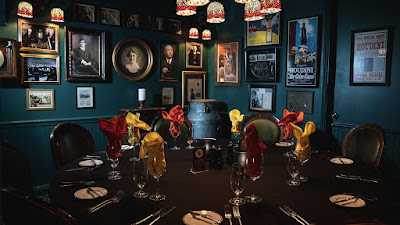 The Academy of Magical Arts is proud to present “The Houdini Séance” - Hollywood’s most famous and immersive theater experience, a Milt Larsen original, one-of-a-kind evening in the astonishing Houdini séance room at the Magic Castle®. We’ve prepared a sensational dining experience for you and your guests, and we’ve invited a world-class medium to sit at the table and conduct a special séance, an attempt to contact the great magician, Harry Houdini, who died on Halloween in 1926. You’ll witness dazzling artifacts from his amazing career; hear the story of his battles with fraud mediums, and enjoy an evening of magical mysteries with weird surprises that you’ll never forget.

I was lucky enough to get a preview of the new seance last month. I'm happy to report that it's a terrific overhaul with a wonderful new script by Jim Steinmeyer. There are some startling new high tech effects engineered by Spectral Motion. But the best old effects are also still in action. There are several celebrity voices worked into the new audio. I'm even part of the show announcing Houdini's appearance the Garrick Theater. The resident mediums have all worked up new "soft seance" pre-shows, and the entire evening is still very Houdini-centric, maybe even more so than the old seance.
I admit the new room will take me some time to warm up to. I've just had too many special experiences in the old room to not feel its loss. Some key artifacts have vanished. But others remain; including a set of three postcards Houdini sent to his sister from Europe. Yes, portraits of Houdini's arch foes, Walter, Margery, and Sir Arthur Conan Doyle now share the space. But that's all part of the show.
You can get full details and pricing for The Houdini Séance Experience at the Academy of Magical Arts website. 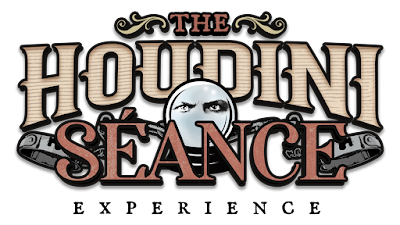