A plea from Patrick Culliton: Save the Houdini films before it’s too late!

This article by Patrick Culliton is published on Patrick’s website Houdini's Ghost and is reprinted here with his permission: 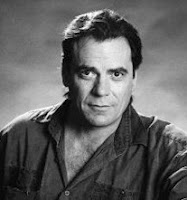 Everyone who is interested in Houdini, even casually, should buy the three DVD set of extremely rare footage of Houdini, the Silent Screen star recently released by KINO. It is a wonderful set. To those interested in early cinema, the silent screen, vaudeville, sci-fi/fantasy, magicians and superheroes, this set is invaluable. This is the first time that a collection of Houdini film footage has been made available to the public.

Up until recently, the one brave soul who fought to find and distribute Houdini footage was William McIlhany, who released Terror Island, The Master Mystery, and the BBC Houdini documentary on VHS. Most recently, he and Todd Karr have released a three dvd set of silent films of magicians which includes rare Houdini footage from a 1926 Pathe Review.

KINO has created a beautiful product in Houdini, the Movie Star. In doing so, they call our attention to footage that is missing. That is what I want to discuss. 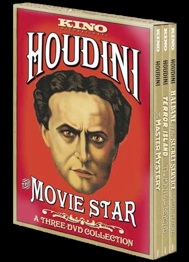 In the KINO set, there is a great deal of footage I've never seen before, and this is “Houdini's Ghost” speaking. One bit of film shows Houdini running through a park in Paris. Two pairs of handcuffs are locked on his wrists. He stops at the wall outside the Paris morgue, strips off his clothes to his boxer trunks, then climbs a gate and stands atop the wall of the morgue. Then he jumps into the river Seine.

He surfaces a couple of times before he frees himself from the cuffs, then, he swims to the opposite shore where men are waiting for him. They throw a coat over his shoulders and hustle him into a car which drives away, pursued by four French policemen who look very much like Keystone cops.

Here's the point: in 1909, Houdini starred in a 10 minute Pathe short. I have never seen the opening sequence, but some private collectors do have it and I have been told that Houdini is seen on a street in Paris. He observes a Parisian policeman arresting a drunk. Houdini protests the treatment of the drunk and is arrested himself. The next segment I have seen. Houdini is taken inside the police station and tied to a chair. A policeman sits in a chair nearby and dozes off, and Houdini escapes from the ropes and ties up the sleeping cop.

I've also seen the next segment in which Houdini is strapped in a straitjacket and locked in a padded cell. He escapes. Apparently, what follows is the piece of film in the KINO special features in which Houdini, handcuffed, jumps into the Seine. To my knowledge, all these segments have never been put together, or rather, put back together.

There are two shots missing from the Paris Seine footage in the KINO set. One is a close-up of the cuffs on Houdini's wrists as he stands atop the wall. The other is the actual shot of him jumping into the water. The missing shots are acknowledged in the DVD. I happen to know where those two shots are. They were used in a BBC documentary on Houdini back around 1976 [The Truth About Houdini - ED]. I remember the filmmakers insisting on first-generation footage. Somebody cut those shots from the Paris footage to be used in the BBC documentary, and they never got put back. 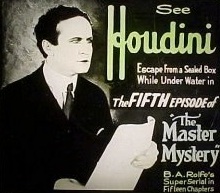 Likewise, there is footage missing from The Master Mystery. We see, for example, Houdini placed in a packing box and thrown off a pier. An inserted title card explains that Houdini escapes underwater. Well, the underwater shot was also used in the BBC documentary. And also never replaced.

Probably the man responsible for scattering so many elements of The Master Mystery to the four winds was Ray Rohauer, who can also be thanked for removing three chapters out of the 15 chapter Serial, and losing them. At one time, Houdini performed approximately two escapes per episode. Many of them are now missing. A particularly unfortunate loss was of a chain escape Houdini performed. I also missed seeing a scene in which Houdini is locked in a jail cell. He stares at the keyhole and we get an x-ray view of the lock as his mind causes the bolt to open.

This lost Houdini footage may still exist in private collections. What must happen is that collectors must unselfishly help to gather the distaff elements together. In the KINO Houdini DVD set, are five minutes of the feature length Houdini film The Grim Game. Actually, an hour long version of that film still exists and a man who considers himself Houdini's greatest fan has been sitting on it for 50 years. Incidentally, while collectors hoard their Houdini film footage, it is dying. 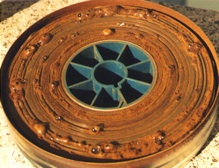 In 1976, a film archive, Sherman Grinberg, screened about an hour of Houdini footage for me when I was technical advisor on a TV movie about him. A couple of years later, I tried to get another screening, but, the nitrate film had shrunk and would be too expensive to try to salvage. When the director/writer Mel Shavelson went to Houdini collector Larry Weeks to look at some very rare footage, they found that quite a bit of it had degenerated to a volatile goo.

In the sixties, I bought a 16mm print of The Man From Beyond which had considerably better quality than the restored versions which are now on dvd. The old man who struck that print died, and no one knew what happened to his negatives.

I have a special perspective about this lost Houdini footage. Back in the late fifties, I saw the entire 15 chapters of Master Mystery twice and each chapter was complete and intact. We are losing these films almost faster than anybody can rescue them, but, we all should make an effort to save every scrap of film we possibly can.