I love captured images of Houdini street advertising. Not only do we sometimes get a look at Houdini posters that are long gone, but it's also fun to nail down the exact engagement and see where it might fit into the larger Houdini story. Below is a great example of both from the collection of Kevin Connolly. 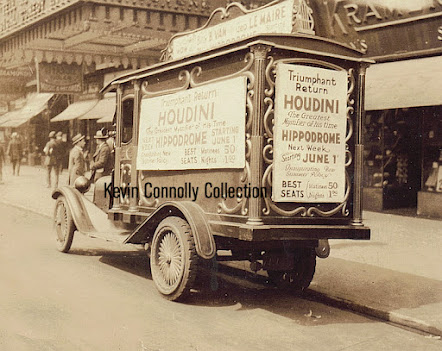 This photo was taken on the streets of New York and the posters are advertising Houdini at the New York Hippodrome starting the week of June 1, 1925. Houdini had done a popular six-week run at the Hippodrome at the start of the year. Hence this is being promoted as his "Triumphant Return."
But this would also mark a farewell. This two-week run at the Hippodrome would be Houdini's very last engagement in vaudeville. The following season he would launch his own full evening show in legitimate theaters. It's also worth noting that Houdini (1953) star Tony Curtis was born in Brooklyn this very same week (on June 3). So this photo captures a lot!
Finally, the great old truck in this photo reminds me of the this set of toy cars released by Oxford Diecast to commemorate the 75th Anniversary of Houdini's death in 2001. In fact, it looks like the red truck might actually be the same make. 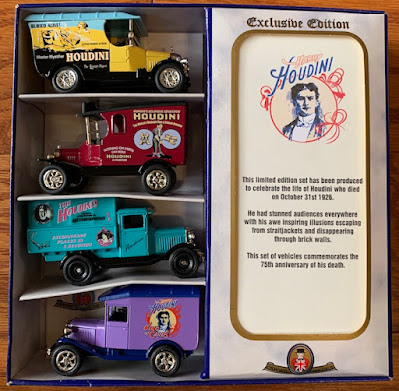 Thanks to Kevin Connolly.
Related: