FATE catches up with Houdini 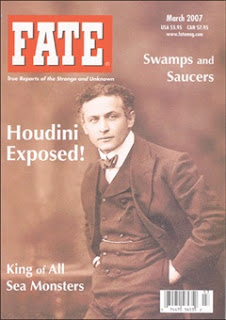 Poor Harry can’t seem to catch a break this month. First we have the battle over whether to exhume his corpse, now FATE magazine features a cover which promises “Houdini Exposed!”

FATE is a magazine devoted to the paranormal “supplying its loyal readership with a broad array of true accounts of the strange and unknown for nearly 60 years.” This current March 2007 issue features a pro-Margery look at the famous Houdini/Margery investigations conducted in 1924 for the Scientific American magazine.

You can subscribe to FATE or buy individual issues at the FATE magazine website.
Written by John Cox at 10:29 AM