The Associated Press reports today that plans are being made to exhume Houdini's body to test for poisoning. This is an old theory which has gained some new traction with the publication of The Secret Life of Houdini by William Kalush and Larry Sloman. Here is the full report from the AP: 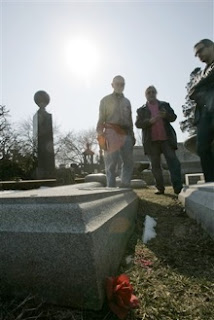 NEW YORK - For all his death-defying stunts, Harry Houdini couldn't escape the Grim Reaper: He died on Halloween 1926, apparently from a punch to the stomach that ruptured his appendix. But rumors that he was murdered have persisted for decades. Eighty-one years after Houdini's death, his great-nephew wants the escape artist's body exhumed to determine if enemies poisoned him for debunking their bogus claims of contact with the dead.

"It needs to be looked at," George Hardeen told The Associated Press. "His death shocked the entire nation, if not the world. Now, maybe it's time to take a second look."

Houdini's family scheduled a news conference for Friday to give details on the plans. Prominent New York lawyer Joseph Tacopina is helping clear any legal hurdles to the exhumation.

A team of top forensic investigators would conduct new tests on Houdini's body, said Hardeen, whose grandfather was Houdini's brother.

The circumstances surrounding Houdini's sudden death are as murky as the rivers where he often escaped from chains, locks and wooden boxes.

The generally accepted version was that Houdini, 52, suffered a ruptured appendix from a punch in the stomach, leading to a fatal case of peritonitis. But no autopsy was performed.

When the death certificate was filed on Nov. 20, 1926, Houdini's body -- brought by train from Detroit to Manhattan -- had already been buried in Queens, along with any evidence of a possible death plot.

Within days, a newspaper headline wondered, "Was Houdini Murdered?"

A 2006 biography, The Secret Life of Houdini

, raised the issue again and convinced some that he might have been poisoned, including George Hardeen, who lives in Arizona and is the chief spokesman for the president of the Navajo Nation.

The likeliest murder suspects were members of a group known as the Spiritualists. The magician devoted large portions of his stage show to exposing the group's fraudulent seances. The movement's devotees included Sherlock Holmes author Arthur Conan Doyle.

In the Houdini biography, authors William Kalush and Larry Sloman detail a November 1924 letter in which Doyle said Houdini would "get his just desserts very exactly meted out ... I think there is a general payday coming soon."

Two years later, Houdini -- by all accounts a man in extraordinary physical shape -- was dead. Kalush and Sloman say that "the Spiritualist underworld's modus operandi in cases like this was often poisoning" -- possibly arsenic, which could be detected decades later.

The authors also suggest that Houdini might have been poisoned by "an experimental serum" injected by one of his doctors at Detroit's Grace Hospital.

Houdini took the Spiritualists' death threats seriously, but he traveled without security, often accompanied only by his wife, Bess.

"If someone were hell-bent on poisoning Houdini," the authors wrote, "it wouldn't have been very difficult."

Baden, who chaired panels reinvestigating the deaths of President John F. Kennedy and civil rights leader Martin Luther King Jr., pointed out a pair of oddities in Houdini's death certificate: It noted his appendix was on the left side, rather than the right. And the diagnosis of appendicitis caused by a punch was "very unusual."

Starrs said he was long familiar with the story of Houdini's death, and believed the fatal injury was the result of an accident until he read the Houdini biography.

"My eyebrows went up when I read this book," Starrs said. "I thought, 'This is really startling, surprising and unsettling, and at bottom, suspicious in nature.'"

The exhumation plan received support from a surprising source: Anna Thurlow, the great-granddaughter of "medium" Margery, whose husband Dr. Le Roi Crandon was one of the Spiritualist movement's biggest proponents -- and one of Houdini's enemies.

During a 1924 "seance," Margery channeled a "spirit" named Walter who greeted Houdini with a threat: "I put a curse on you now that will follow you every day for the rest of your short life."

"With people that delusional, you have to question what they're capable of,'" Thurlow said. "If there's any circumstantial evidence that Houdini was poisoned, we have to explore that."