Newsday has an update in the proposed exhumation of Houdini to test for poisoning. Here is the article in full: 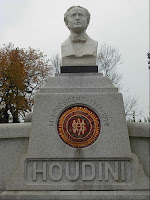 If the family of legendary escape artist Harry Houdini succeeds in having his remains exhumed, forensic scientist James Starrs said Friday that his team of experts would look for evidence that Houdini was murdered.

An attorney for a relative of Houdini said would file court papers on Monday seeking to disinter the body from Machpelah Cemetery in Ridgewood.

The group that has been maintaining the graves of Houdini's family for decades is aghast at the prospect.

"We're very upset about all this," said George Schindler, the dean of the Society of American Magicians, a group that Houdini once presided over. Schindler, who noted that the cemetery was Jewish, added, "We feel it's almost like desecrating it."

An exhumation would go beyond seeking to determine whether the magician was poisoned, said Starrs, a George Washington University law professor who has spearheaded other high-profile exhumations. Starr said his volunteer group of forensic experts, pathologists and toxicologists would perform x-rays and examine the hair and fingernails.

All that George Hardeen, whose grandfather was Houdini's brother, knew about Houdini's death came from stories passed down from his father.

"I had no inkling that Houdini might have been poisoned," he said via a telephone conference call from Tuba City, Ariz., where he lives.

When Houdini died on Halloween 1926 at age 52, the cause was listed as "traumatic appendicitis" brought on by a blow to his abdomen. But according to modern medicine, appendicitis cannot be caused by being struck.

The authors of a recent biography, The Secret Life of Houdini

, wonder if Houdini's work debunking fraudulent Spiritualist mediums had made him enemies who would go so far as to kill him.

Author Larry Sloman said one possible scenario was that Houdini was poisoned for his activities against the Spiritualist movement.

But Schindler said it was his personal opinion that the exhumation effort was a mere publicity stunt. "I don't believe we should bother with this. It's a shame. The man's been dead for so many years," Schindler said. "I don't see what they have to prove." 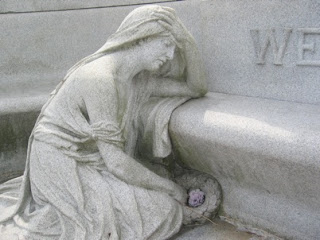 UPDATE: Blood family speaks out against exhumation.
Written by John Cox at 8:48 AM