Blood family speaks out against exhumation 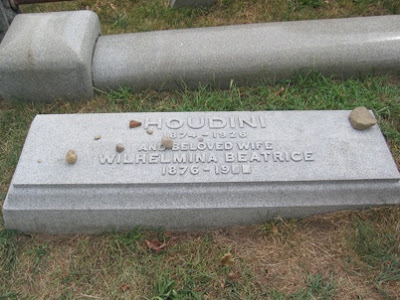 The Blood family have issued a statement speaking against the proposed exhumation of Houdini to test for poisoning. Here is their statement in full which was posted at the Scranton Houdini Museum website.

Regarding the proposed plan to exhume the body of Harry Houdini, relatives of Beatrice (Bess) Houdini are totally against it.

Based on information made available to us over the years, we feel there is no need to exhume his body. It is our firm belief that Bess Houdini would never approve of this. The family believes this is likely being done to promote sales of a recent book on Harry Houdini suggesting he may have been murdered.

The Houdini family wants to honor the name of Houdini and not use it for sensationalism that does not honor him.

Marie Hinson Blood (Houdini’s niece) and David Copperfield were two of the honored speakers. Our family presence at this event was represented by 14 family members. We do not know why relatives of Hardeen (Houdini’s brother) did not participate in this event honoring Houdini.

The Houdini family established a youth magic scholarship fund through SAM when Marie Hinson Blood passed away in November 2004. This was to honor Houdini, the uncle she loved so much. Marie spent the last 20 years of her life speaking at magic conventions, schools and community events of her childhood memories of living with her aunt and uncle, the famous Houdini’s. In 2000 we established “Houdini Family” DBA to preserve the memories of Houdini and promote the art of magic.


UPDATE: This response from the Hardeen side of the family was released today via the Associated Press.


Bruce Bobbins, spokesman for the Hardeen side of the family, said the Blood relatives - in an odd twist of phrase - “are not blood relatives of Harry Houdini and therefore have no legal standing on the issue.”

Bobbins, of Dan Klores Communications, said that the Hardeen contingent was willing to meet with the Bloods to discuss any concerns, but that “we are still committed to moving forward in an expedient manner with the exhumation process.”


UPDATE 2: The Washington Post has a report on all this that may shed the most light on what's really going on here. Read: Why not just hold a seance?
Written by John Cox at 8:43 AM