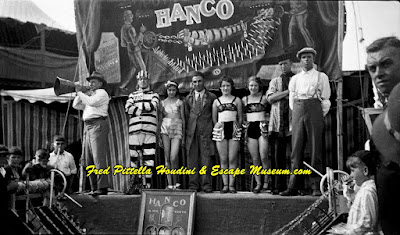 When Houdini toured Australia in 1910, he discovered the country was as jam-packed with rival "Handcuff Kings" as the U.S., UK, and Europe. In fact, part of his stage patter while in Australia was to inform his audiences that he was the originator of the feats they've been seeing other escapists perform for years.
One of the most active of those rivals was "Hanco The Handcuff King" (real name Sam Cooke). Hanco did handcuff, straitjacket, and challenge escapes, and also promoted his appearances with outdoor stunts. After Houdini left Melbourne for Sydney in April 1910, Hanco arrived in town and did a stunt at Queen's Bridge where Houdini had made a handcuffed dive just a few weeks earlier. But Hanco had his own approach. Check out the description below:
Yes, that certainly sounds like an overboard box escape to me! And this is two years before Houdini's first overboard box in New York on July 7, 1912. Hanco also did a version of the escape on stage, which you can see advertised below.

Hanco did his overboard box in several Australian cities that year. But he seems to have had repeated difficulty getting his box--which may have been a commercial steamer trunk--to sink. And in Wagga Wagga he had another mishap.
It's possible the issues Hanco had with staging the escape led to him abandoning it by mid year. After Houdini left the continent, Hanco began doing standard bridge jumps instead.
Houdini was certainly aware of Hanco. He posted some of Hanco's billing into his scrapbook of imitators. So there's little doubt Houdini would have been aware of Hanco and his overboard box escape during his 1910 tour. So is this were Houdini got the idea?
We've all heard the story of how Harry Blackstone Sr. said he originated the overboard box escape, a claim Houdini always disputed. I've tried my best to confirm Blackstone's story, but I've never found any newspaper clippings or photos of Blackstone doing the escape before Houdini. But now I'm thinking that argument is moot. From the evidence we have here, it appears both Harrys were beat to the box by Hanco The Handcuff King!

Thanks to Fred Pittella for the top photo which shows Hanco later in his career.