Following up on the news that several Houdini posters were discovered inside the walls of a house in Rhode Island, Lee Levin sends this photo of himself posing with one of two posters that were, yes, discovered inside the walls of a home in Chicago! The poster advertises Houdini's "3 Show in One" at the Shubert Princess Theater in Chicago for the week of March 8, 1926. 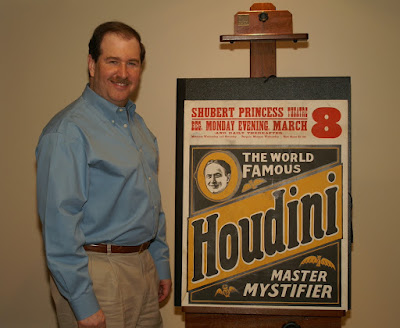 According to an account of the discovery at William Pack's Chicago Magic blog, in 1996 a roofer rehabbing the attic of a 1920s era bungalow discovered a group of 50 to 100 posters being used as insulation. Recognizing the name Houdini, he rescued two posters from the dumpster and displayed them in his home. When a documentary alerted him to their potential value in 2005, he passed them to a dealer who sold to Lee. 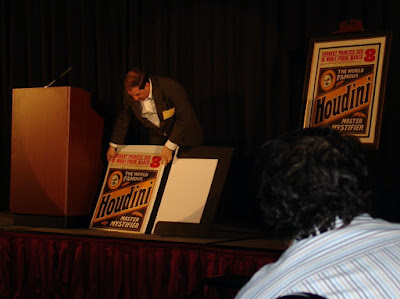 Lee alerted The History Detectives who ran an episode about the find in June 2006. He then lectured on the posters at the 2007 Magic Collectors Convention (above) where he sold one to a private collector. Lee still owns the other.
But there's more. Tom Rozoff at the Magic Collector's Corner Facebook group alerted me to a similar find from around 1982. In this case four window cards were discovered in a house being demolished in Wisconsin. These cards are the same as the ones recently found in Rhode Island (all with the Sept. 20 date). Below is a page from a magic catalog selling the cards for between $100 and $250. If only! 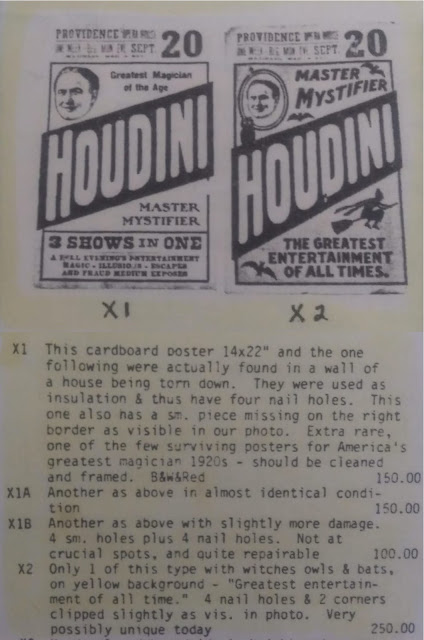 I've also long heard that a cache of Houdini silent movie posters were found in the walls of 278, but I've never been able to confirm the story. (Maybe someone here can?) Unfortunately, no posters were found during the current renovation.
In all these cases the posters were being used as insulation, which appears to have been a common practice. So if you have a house that dates back to Houdini's time, what are you waiting for? Tear out your walls! 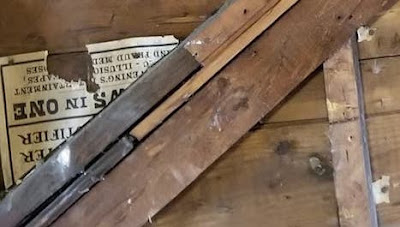 Thanks to Lee and Tom.

Email ThisBlogThis!Share to TwitterShare to FacebookShare to Pinterest
Tags: 1926, 1980s, 3 Shows in One, Posters