Houdini stops off in Lowell 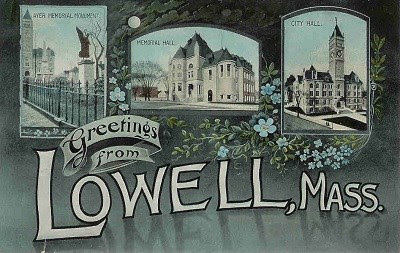 On November 18, 1918 Houdini made a quick personal appearance at the Merrimack Square movie theater in Lowell, Massachusetts. He was on his way to Boston for the premiere of The Master Mystery that very night. Here's a terrific account of his appearance from The Lowell Sun that also serves up a couple Lowell-related mysteries.
Note that Houdini says he had made three previous visits to Lowell. I can identify two of those. The first was in 1896 when Houdini played with the American Gaiety Girls in Lowell for three days in late March (23-25). The second is when Houdini played the Lowell Opera House for the week of February 12, 1906 (my sourcing on this is a little loose so this isn't a lock).
The article also mentions a jailbreak from the Market street police station "five or six years ago." I don't have any record of this. Possibly it happened during that third yet undiscovered appearance? But a jailbreak would also fit with his 1906 appearance as that was his standard publicity stunt at that time. Hardeen also played Lowell on occasion.
It's surprising the Sun article doesn't mention The Master Mystery as Houdini was there expressly to promote it playing at the Merrimack. And what a day at the Merrimack that was! Not only could you see the first episode of The Master Mystery and Houdini in person, but you also got Charlie Chaplin and William S. Hart movies! 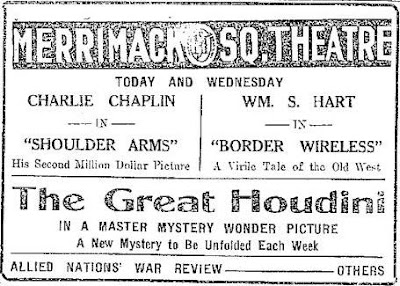