Recently I shared a link to an article about Houdini in the Jan-Feb 2021 Scottish Rite Journal, a magazine devoted to Freemasonry. The author, Maynard Edwards, got in touch, and explained that in the time it took to the publish that piece, he had continued his research and made several new discoveries and some corrections. So today I'm excited to share his updated article which rewrites what we know about Houdini the Mason. Enjoy. 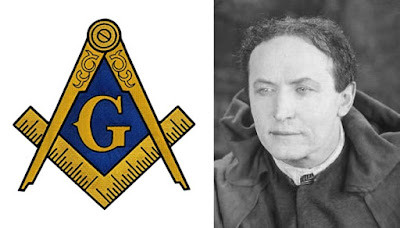 On any list of famous Freemasons, Brother Harry (Houdini) is sure to be found. He was raised in St. Cecile Lodge #568 in New York on August 21,1924. St. Cecile Lodge was (and still is) a Daylight Lodge, geared specifically towards those in the performing arts, who often would not be able to attend evening meetings.

For at least the last thirty years, it has been reported that Harry became a Shriner shortly before his untimely death in 1926 and dates for his Scottish Rite Membership were not recorded publicly. However, a recent discovery at Mecca Shrine allows us to cement his both his Scottish Rite and Shrine initiation dates much earlier than previously reported. 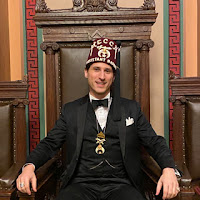 In March 2019, while cleaning up their office in the Grand Lodge of New York, Members of Mecca Shrine discovered a door hidden behind an old filing cabinet. The door led to a locker room and a curious discovery. The Current Assistant Rabban of Mecca Shrine in New York City, Noble Zachary Ostrow (right) explains "There was a big green locker that just had Mecca Shrine scribbled on the front of it. I don’t think anyone knew it had noticed it at least since the eighties. In there we found books full of Lodge records including petitions. The petitions were all numbered so we knew which ones were missing. After a few days of going through those books I found Houdini’s petition and it shows that he became a member in 1924. All the history books say 1926, and so people have gotten upset with me for finding this and making them have to re-write the history books."
The petition is signed by Houdini, and in his own handwriting he states his occupation as "Author – Lecturer - Mystifier". Conclusively we can now document that Harry Houdini became a Noble of Mecca Shrine on December 29th, 1924. Houdini became a Scottish Rite Mason in the Valley of New York Lodge of Perfection on October 7th 1924, joined the Council of Princes of Jerusalem on December 16th, and entered the Consistory on December 23rd.

Houdini was 50 years old when he became a Mason, but his experience in fraternal organizations began in 1903 when he became a member of the fledgling Society of American Magicians. The group had started only the year before with just 24 members in the back of a New York City magic shop. A rift with another prominent member of the club would cause Harry to resign in 1908, but by 1915 fences had been mended and Houdini was from then on an avid supporter of the group. He would be elected SAM President from 1917 until his death (interestingly, as President of S.A.M., Harry and other officers were referred to by the the title Most Illustrious).

When performing in a particular town, it was often Harry’s habit to connect with the local magicians and there are many surviving letters of his correspondence with fellow illusionists. It may have been such a connection that caused Harry to first mention an interest in Freemasonry.

A postcard sent from Harry Houdini to a Mr. A. Buckle in 1904 was recently sold by the world famous Potter & Potter auction house in Chicago. The type written postcard, which sold for $900, reads:

My Dear Buckle,
Am very busy, have a very big task Tomorrow, and do not feell [sic] very much like writing. Regarding me being a Mason, I regret to inform you that I am not a Mason, and hope some day to belong to that Order. I do not belong to any secret order, and am a member of the S. of A. Magicians, and an Artist club in Germany.
Regards
Houdini.

The “A. Buckle” in this case was 20-year old Manchester Magician Arthur Buckle, sometimes billed as the Manchester Wizard. Buckle’s career consisted of mostly of private performances and writing for magical trade publications. The relationship between the then 30-year old Houdini and the younger conjurer isn’t well-documented, but it would not be a stretch to assume that as magicians they would have made each other’s professional acquaintance and become friends. The postcard salutation “My Dear Buckle” and another surviving letter from Houdini to Buckle indicate a personal relationship.

The postcard itself is remarkable for several reasons. First, the date of the postcard is March 16th, only a day before the famous Daily Mirror Handcuff Challenge, and the writing clearly indicates the challenge was on his mind. Also, Houdini expresses that he did not feel like writing. We know Houdini was troubled by an unknown illness during the end of his Hippodrome engagement and not long after the handcuff challenge, Harry was forced to take 12 days bed rest, canceling a number of engagements. Does this note indicate he was already feeling ill? Finally of course, it does seem to be the first documented expression of Houdini’s interest in Freemasonry.

While the postcard only reveals one side of the conversation between the two magicians, from it we can suppose that Arthur Buckle was a Mason and had asked if Houdini was a Mason, perhaps even inviting him to Lodge. In a collection of Houdini papers at the University of Texas in Austin, there exist other letters between Houdini and Buckle that may reveal more details, however as of this writing, those letters are not accessible due to the COVID-19 crisis.

It would be another twenty years before Houdini’s interest in Freemasonry would manifest itself into his petitioning a lodge. Perhaps the business of being an international celebrity kept Houdini from joining the Brotherhood sooner rather than later? Or perhaps being elected President of the Society of American Magicians in 1917 increased his interest in fraternal organizations? We can only speculate as to why two decades elapsed before he was raised, his reasons are just one of the many secrets the Great Harry Houdini took to his grave.

There are no known photos of Harry in any Masonic garb, and his blue lodge petition, though not in question, has yet to be located. According to several Masonic sources, it is alleged that sometime after he became a Mason, Harry gave a benefit performance for for the Scottish Rite Valley of New York before a sold-out crowd of more than 4000 spectators at the Scottish Rite Cathedral (formerly the Manhattan Opera House, currently the Manhattan Center). However, no contemporary reports of this performance have been located, and no references to any such fundraiser has been found in any official Scottish Rite transaction. This leaves much doubt as to whether or not the performance truly occurred or perhaps was somehow conflated with another similar performance at some other time and place.

However, after his untimely death in 1926, Masonic funeral rites were performed by the Brothers of St. Cecile’s Lodge- which incidentally was held at the Elks clubhouse in New York (Harry became an Elk in 1912).

A great many vaudevillian performers were members of the Craft. Several of Harry’s Magical contemporaries were taken and accepted including Harry Kellar, Howard Thurston and even William Ellsworth Robinson- better known by his stage name Chung Ling Soo. As traveling performers, the Masonic Brotherhood would have provided vaudevillians with sort of safety-net while on the road. So too, the fraternity may have lent some of its dignity to a professional class that had historically been looked down upon.

Today the legacy of Houdini and the other Magical Masons of his era lives on in the Invisible Lodge, a Masonic club specifically for Master Masons who are either professional or amateur magicians. Founded in 1953 the club meets annually at midnight either at local Magician’s conventions or more recently at the Magic Castle in Hollywood. The Magic Castle itself is a private club for magicians and regularly members gather to hold a séance in an effort to contact the spirit of none other than Harry Houdini; so far the even the Great Houdini has not managed to reach back from the other side.

*Ill. Brent Morris, 33 and Jeff Croteau, Director of Library & Archives at the Scottish Rite Masonic Museum and Library in Lexington Massachusetts contributed to this article.