Review: Man Vs History Vs Houdini 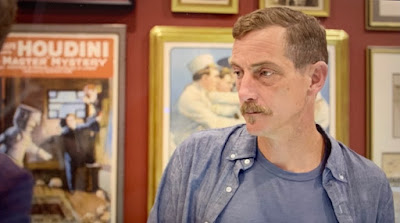 Houdini is the subject of the third episode of the new series Man Vs History with Bil Lepp. The show had its first airing last Tuesday on HISTORY and offered up a new and refreshing approach to the Handcuff King.
Instead of a standard biography or rehash of the well-trodden spy and murder conspiracies, this episode tackles two specific claims, both rooted in reality, of how Houdini may have accomplished his feats. This first is Houdini's own claim that he dislocated his shoulders to escape from a straitjacket. The second is the recently uncovered claim by Hardeen that a bullet in his brother's hand allowed him unique dexterity in slipping off handcuffs.
Lepp's investigation brings him to Houdini collector Roger Dreyer and escape artist Matt Johnson. The interview with Roger gives us our first look inside his new Houdini Museum. Lepp also consults with a hand specialist, Dr. Daniel Osei, regarding Houdini's famous bullet injury. 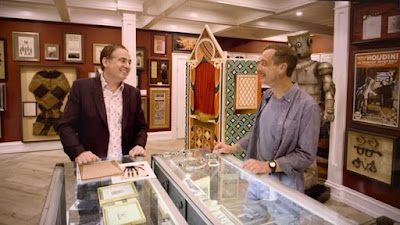 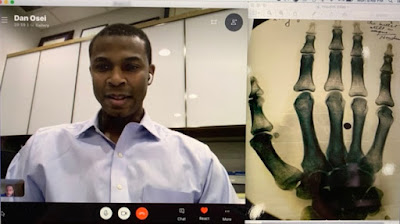 Matt Johnson performs a suspended straitjacket escape at the Garret Mountain Reservation in New Jersey. I'm happy to report that he puts the jacket on as Houdini did and does not cheat it with a straitjacket fail. Good work Matt! 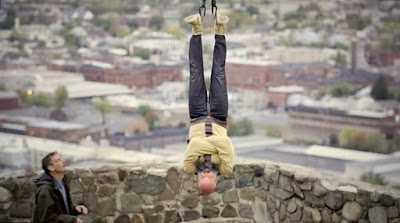 Lepp ultimately concludes that both claims are likely more showmanship than fact. He also quotes Houdini himself as saying, "I can dislocate my shoulders. But I do it the more complicated way without dislocating my shoulders."
Overall, the show was well researched with nice use of photos and film footage. If I had any complaint it would be that the episode wasn't all about Houdini. There is a second segment about Annie Edson Taylor's plunge over Niagara Falls in a barrel. However, this was pretty interesting in itself, and there is a Houdini-Annie connection which you can read about HERE.
No doubt this episode will repeat on HISTORY. But you can also stream it at the Man Vs History website or purchase it at Amazon Prime Video.
Related:
Written by John Cox at 10:24 AM