Over the weekend a poster for Houdini's 1908 appearance at the Circus Brusch in Germany sold on eBay. I mentioned that I had seen that poster along with another for Houdini's "Grand Magical Revue" at Wilshire Coin in Santa Monica in 2016. Here's a photo I took that day of that other poster. 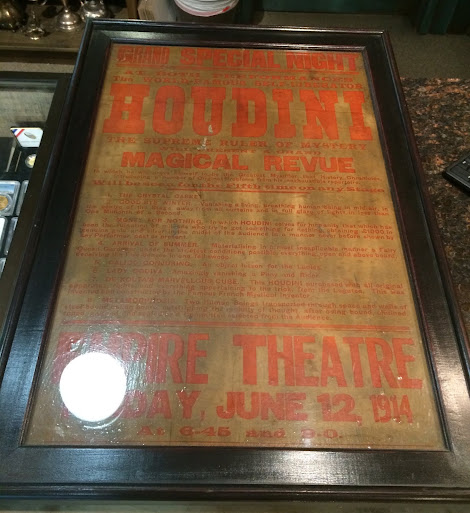 The Grand Magical Revue with a short-lived attempt by Houdini to mount a straight magic show in England in 1914. He only presented it a dozen times. This poster is for the last known performance at the Empire Theatre in Nottingham on June 12, 1914.
Both this and the Circus Brush poster came from the Houdini Magical Hall of Fame in Canada. Both are heavily lacquered. There are a few surviving Grand Magical Revue posters, but what's nice about this one is it lists "De Kolta's Marvellous Cube" among the illusions to be performed. This poster appears on page 101 of Houdini His Life and Art by James Randi and Burt Randolph Sugar.
I've not seen this poster since that day back in 2016, but it was for sale along with the Circus Brush poster. Perhaps that means we will see it appear on eBay as well?
UPDATE: Looks like this poster has inspired some reproductions over the years, as seen below. The one on the left was part of a "Houdini Portfolio" from the 1970s. On the right is a reproduction created by the Houdini Historical Center in 1995 (thanks to Chunk Romano for the image). Looks like the HHC felt the need to add a photo of Houdini in chains, which is incongruous on a poster advertising him as a straight Magician. 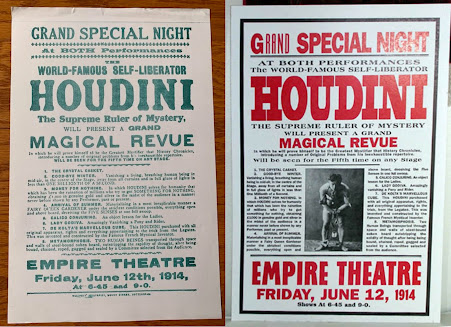