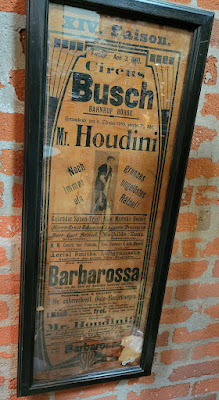 A rare playbill for Houdini at the Circus Busch in Berlin in 1908 sold in a one day Buy It Now auction on eBay yesterday. It was initially listed for $5000, but then reduced to $2500. The seller was The Record Parlour, a vintage record and memorabilia store in Hollywood.
The listing didn't provide any provenance, but I can. This was part of a four poster display at the Houdini Magical Hall of Fame in Canada. It was auctioned in 1999 and wound up at Wilshire Coin in Santa Monica, where I got a look at it in 2016. At the time the owner was looking to sell this along with another poster for Houdini's Grand Magical Revue. (You can see that poster HERE.)
As far as the playbill itself, it certainly checks out historically. Houdini opened at the Circus Busch the week of August 31, 1908. This advertises his appearance on Saturday, October 3, which was midway through his eight week run. Houdini was featuring his Milk Can at this time. The photo of Houdini in cuffs is from 1904.