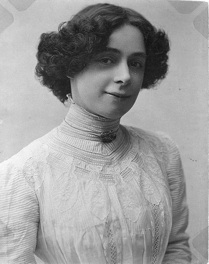 While most are debating the question of whether or not Houdini worked as a spy for the U.S. and UK governments -- a theory proposed in the new biography, The Secret Life of Houdini

-- another revelation in this same book is receiving some attention from magic buffs. The revelation that Houdini’s wife Bess smoked marijuana.

Bessie’s alcohol problem is well known, but this is the first documented use of drugs -- although, ironically, back then marijuana was legal while alcohol was illegal.

The smoking gun evidence (no pun intended) appears to be an October 19, 1927 diary entry in which Bess says she dined out and was home early with “no drink or weed.”

I was told by Bess’s niece, Marie Blood, that Bess smoked cigarettes. She chain-smoked, in fact. This is not widely known. So could the “weed” Bessie is talking about here be tobacco?

I threw this question out to the magic historians on the Genii forums and got some answers. Turns out, “weed” was indeed a commonly used word to describe tobacco. James in Toronto says, “Pot was called a number of other things at the time, including gage, tea, muggles, and reefers. (See Really The Blues

by Mezz Mezzrow for a memoir of that era.) But everyone called tobacco ‘the weed’.”

Bill Mullins adds that The Oxford English Dictionary's first print citation for "weed" meaning "marijuana" is 1929. However, he also found references to marijuana as “weed” in online newspaper archives going as far back as 1910.

So Bessie could have been talking about tobacco...or marijuana.

Either way, party on Bessie!
Written by John Cox at 8:16 AM