Houdini is a no show at official seance

The Official Houdini Seance was held last night at the Center for Jewish History in Manhattan. Here's a full account of the seance from The New York Times: 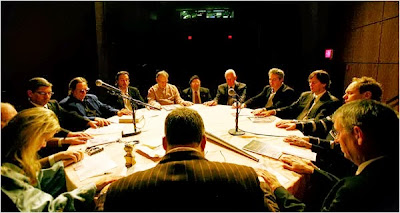 Houdini Declines Comment, but Not for Want of Trying
By JAMES BARRON
Published: November 1, 2006

Harry Houdini is still dead and still not talking. Efforts to reach him yesterday failed.

The expectations were not terribly high at an annual séance held on Halloween, the day on which Houdini died in 1926. Teller, the quieter half of Penn and Teller, showed up, saying, “I’d be stunned if Houdini showed up, and so would he.”

So the question was whether Houdini — the master escape artist, the man who could slip out of handcuffs and arise from tomblike burials — would escape the afterlife.

There was an empty chair waiting for him on the stage in the auditorium at the Center for Jewish History, on West 16th Street in Manhattan. The chair was a hard wooden one provided by Anna Crankshaw, the great-granddaughter of the Boston medium known as Margery. Houdini had tangled with Margery. Maybe he would prefer one of the more comfortable padded seats in the audience.

But why would someone who was as famous as a movie star sit there? And what’s with that “famous as a” line? He was a movie star. And he appealed to women, no matter how carefully his earliest biographers airbrushed the record.

“He was always portrayed as faithful to his wife,” said William Kalush, an author of a brand-new biography, “The Secret Life of Houdini.”

Larry Sloman, who wrote the book with him, added, “The first biography was authorized by his wife, so she put out the stories she wanted.” (Their book makes the case that Houdini was a spy who tackled special projects for British intelligence and the United States Secret Service, but that is another story.)

Up on the stage, with the empty chair, were 13 magicians and Houdini experts. One of them was Dorothy Young, 99 years old, who was in the cast of Houdini’s touring show in 1925.

She said she was “the radio girl,” which meant that she never ate until after a performance. Why not? As the radio girl, she explained, “I had to fit in the radio.”

And she had talked with Houdini about this returning-from-the-dead thing. While he was still alive, of course.

“He told me, ‘It’s humanly impossible, but I’ll be there in spirit.’ That’s firsthand.”

Next to her was Thomas J. Boldt, who was identified in the program as a “Houdinite.” As the lights went down, he stood and introduced the séance director, Sidney H. Radner, who instructed the audience to turn off all cellphones. Mr. Radner did not want anyone’s concentration broken by a jazzy ring tone, and besides, he did not expect any missed calls to be from Houdini.

“I don’t think Houdini is going to come back by cellphone,” he said.

So much for the preliminaries. He introduced Jon Stetson, whom the program identified as a “renowned New England psychic medium.” His Web site, jonstetson.com, describes him as an “internationally acclaimed mind reading comedian” and a “corporate entertainer like no other.”

But Mr. Stetson sounded serious. He told the audience, “Success rests on your willingness to push aside logic.”

He told the people on the stage to join hands. The lights dimmed further. Mr. Stetson implored Houdini to make an appearance.

He tried flattery, telling Houdini that he was “a crusader, a genius.”

Mr. Stetson said there was energy in the room. But his patience began to wane. “We’re waiting for a sign, Harry,” he said. “It’s been 80 years, Harry.”

After about 20 minutes, he called a halt to the séance. “I do not feel contact was made,” he announced.

No, he said a moment later, he did not consider his efforts to have been pointless. “Personally, I don’t think the day is right.” Too much skepticism, too many people out there doing séances using fraudulent methods Houdini would have exposed.

And, he said, he wasn’t expecting to see a “bolt of lightning” because “the true manifestations are in us.”

“It all happens in our head,” he said.

But there were those who were not sure that nothing had happened.

“This was the closest yet,” Mr. Sloman said. “I felt something in the room. Maybe it was Harry sleeping here. Maybe it was having my hand interlocked with Kalush, who I’ve never done that with in three years of working on a book.”

Then a couple of people told Cathy Krugman, the director of development for the American Jewish Historical Society, that three of the tall, silvery letters that spell “Center for Jewish History” at the back of the stage — specifically, the I, the S and the H — did not go dark when the lights went down. And then they flickered.

In the end, Ms. Krugman said, “I don’t know if that was Giovanni.”

Giovanni Massa, she explained, was the technician running the lights.