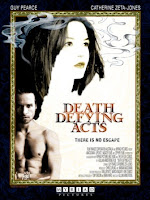 TWC's Harvey Weinstein bought the film off a promo reel made available for the first time at the American Film Market (AFM).

Though produced for less than $20 million, sources claim that The Weinstein Co will pay somewhere near $5.5 million for the distribution rights. This amount doesn't include the territories Weinstein has rights to outside the U.S. such as Argentina, Hong Kong and China.

The film is a “supernatural romantic thriller” which tells the fictional story of Houdini’s relationship with a Scottish psychic played by Zeta Jones.