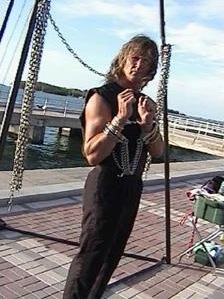 KEY WEST, Florida (Reuters) - Police arrested an escape artist on Wednesday after he led them on a fruitless underwater search for his body when he jumped into the Gulf of Mexico, clad in a straitjacket, on Halloween -- the 80th anniversary of magician Harry Houdini's death.

Coast Guard, wildlife agents, police, fire rescuers and street performers took up the hunt for Michael Anthony Patrick on Tuesday night after he jumped backward into Key West Harbor, having jokingly asked his audience if he should do a triple back-flip off the pier.

Patrick, 55, however, somehow managed to elude his rescuers and checked into a guest house. He did not reveal how he wriggled out of his straitjacket, nor how he avoided detection until Wednesday.

Police in Key West said they planned to seek monetary restitution for the search operation, estimated to have cost more than $25,000. They charged Patrick with culpable negligence, and freed him on a $50,000 bond.

"In addition, we are recommending that Michael Patrick be banned from future entertainment activities at Mallory Square," said Bill Mauldin, Key West police chief, in a news release.

Houdini died of peritonitis from a ruptured appendix at age 55 on Halloween 1926. The escape artist was renowned for freeing himself from handcuffs, chains, rope and straitjackets while suspended in water or hanging from a rope.
Written by John Cox at 1:59 PM