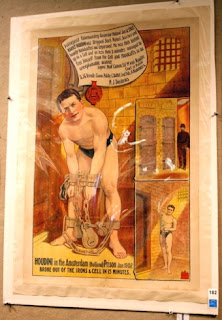 The first was a full color poster depicting Houdini’s escape from an Amsterdam jail in 1902. Anonymous bidder #419 (who reportedly took home nearly every high-end item) got the poster for $65,000.

 Next came the more familiar, but equally stunning, Europe’s Eclipsing Sensation poster. This poster also featured on the auction cover catalog. Bidder #419 battled it out with a phone bidder, but in the end claimed it for another $65,000.

So who was the mysterious bidder #419? Speculation at the auction was that it was David Copperfield. However, it turns out #419 was a private company located in India.

All I can say is, "Wow!" It seems every time a Houdini poster comes up for auction a new record is set.

You can read a terrific first-hand account of the auction at nnmagic.com.

Thanks to Joseph Holland for the tip.
Written by John Cox at 9:33 PM