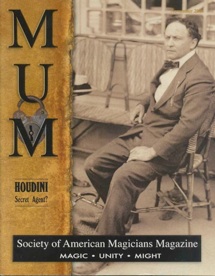 Houdini is on the cover of the November 2006 issue of M-U-M, the official magazine of The Society of American Magicians (for which Houdini was President from 1917 to 1926).

The inside article by John Moehring asks "Was Houdini a Secret Agent?", the provocative theory put fourth in the new book The Secret Life of Houdini: The Making of America’s First Superhero

by William Kalush and Larry Sloman.
Moehring doesn't draw a conclusion himself, but simply lays the surprisingly slight evidence that Kalush and Sloman use to build their spy narrative (namely a few diary entires by Superintendent Melville of Scotland Yard referencing someone with the initials HH).

The issue also contains excerpts from the new book, including the chapter that deals with his Film Developing Corporation and brief movie career.
Written by John Cox at 6:10 PM