Is this the original Anna Eva Fay gazing ball? 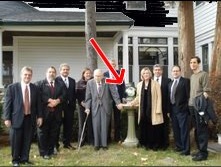 Our recent report on The Official Houdini Seance, which took place this year at the former estate of Anna Eva Fay in Melrose MA, featured a group photo of seance attendees on the estate grounds. Houdini fans may have spotted a very familiar landmark amid the group -- the gazing ball and birdbath that we’ve come to know from the famous shot of Houdini and Anna Eva Fay taken in 1924.

So is that the original gazing ball and birdbath?

Jennifer Yee, the great-grandniece of Anna Eva Fay who currently resides on the property with husband Gene, has graciously provided the answer, along with some wonderful details about this fascinating property:

“The gazing ball and birdbath were lost to the ages; when the previous owners bought the estate from Anna Eva Fay's sister in 1941, it was already gone. After we bought Heathman Manor in January 2007, our magician friends asked about the bird bath/gazing ball as well as secret passages.

The bird bath is from a garden shop in nearby Peabody, and the gazing ball was hand blown by an artisan in OK, as well as the stand poured by hand that approximates that captured in the famous picture. The gazing ball is hand blown glass that even survives harsh NE winters, and is a sea mist color, to complement the green trim of the Victorian. And of course, there is that log cabin in the back, which was Anna Eva Fay's study, sometimes lecture area, and rehearsal space--complete with 2-story stone fireplace, and original lead stain glass. An alabaster sculpture remains in the rafters from her time here. That is where the Houdini Seance took place this year.

There is also a secret staircase inside on of the kitchen cabinets in the main house leading upstairs outside the bedrooms--we believe to allow wait staff to "disappear" after serving distinguished guests, like, well, Houdini and Conan Doyle.”

Jennifer and Gene Lee occasionally preform under the stage name Yee Magik, recreating the Spirit Cabinet with their own unique twist. Thank you Jenn and Gene for a peek behind the curtain!
Written by John Cox at 10:53 AM