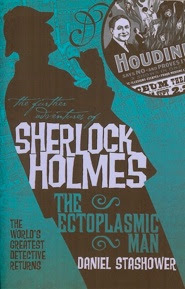 Daniel Stashower’s The Adventure of the Ectoplasmic Man

-- a fictional teaming of Harry Houdini and Sherlock Holmes -- has been reissued in a new paperback edition by Titan Books.

Stashower’s novel was first released in hardcover in 1985. The book finds Houdini framed and jailed for espionage with Sherlock Holmes working to clear his name by taking on blackmailers who have targeted the Prince of Wales.

series -- a collection of Sherlock Holmes pastiche novels reprinted under a uniform name and cover art.

The Further Adventures of Sherlock Holmes: The Ectoplasmic Man is available from Amazon.com