Did you happen to catch Houdini’s stealth appearance on NBC’s The Office last Thursday?

In an episode of Season 6 called “Shareholder Meeting,” Jim dresses down lazy temp Ryan. In the background, tacked up on the Dunder Mifflin bulletin board, is what appears to be a Houdini postcard. You can catch it on HULU at 17:20. 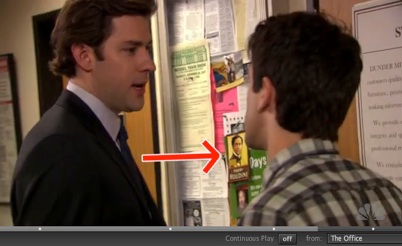 The postcard image is one of Houdini’s most famous lithographs, now referred to as the “Houdini for President” poster (this may have started when Grosset & Dunlap first suggested this resembled a presidential campaign poster in 100 Years of Magic Posters, 1976). It was originally created in 1911 by the Strobridge Lithograph Company in Cincinnati and was used by Houdini throughout his career.

The image we see in The Office is a little odd in that it has been shortened -- the name block has been moved up over Houdini’s folded arms.

So why is there a Houdini postcard on the Dunder Mifflin bulletin board? I’m not sure, but as The Office is set in Scranton, Pennsylvania, it is possible this is a clever nod to the Scranton Houdini Museum run by Dorothy Dietrich and Dick Brookz, a popular Scranton tourist stop.

Interestingly, this poster has a history of showing up in the background of films, including the famous “vanishing man” short film featuring Houdini himself.


Here is the full “Houdini for President” lithograph, truly one of my favorite Houdini images. The original poster stands over six feet.

UPDATE: The Office continues to tease us with hidden Houdinis.
Written by John Cox at 10:16 AM