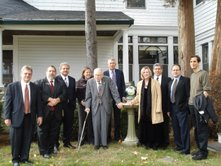 The Boston Globe reports that The Official Houdini Seance took place this year in Melrose, Massachusetts, at the former estate of Anna Eva Fay.

Fay was a longtime friend of Houdini's and a famous mentalist and entertainer in her own right. Houdini and Fay corresponded for over 12 years. Houdini visited her home in 1924 and wrote a lengthy report about their afternoon meeting.

Unlike many Houdini-Halloween seances, The Official Houdini Seance is a serious and sincere attempt to contact Houdini on the anniversary of his death. Says Seance Director Sidney H. Radner, "We honor his memory each year with this seance. We create the proper conditions at locations we feel can lead to success."

The Official Houdini Seance was by invitation only. The medium for the 2009 Séance was Nancy Garber, a renowned Boston-based psychic/medium.
Written by John Cox at 9:26 AM