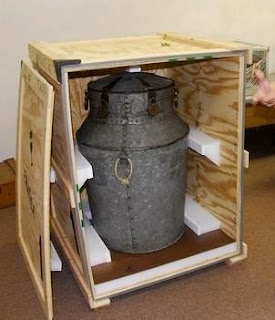 The Battle Creek Enquirer reports that about 20 items from the American Museum of Magic in Marshall, Michigan are going to the Houston Museum of Natural Science to be featured in "Magic: The Science of Wonder," an exhibition running Feb. 26 to Sept. 6. Among those items are Houdini's original Milk Can, a packing crate, and his ‘East Indian Needles’ effect.

After appearing at the Houston museum, those same items are expected to be moved to the Jewish Museum in New York, according to Jeff Taylor, who started this month as the American Museum of Magic's first full-time director.

"They've looked around and realized there's a pretty significant collection of magic right here at the American Museum of Magic," Taylor said. "This is a hard-to-find, privately owned but publicly accessible collection."

The Marshall museum has been around for more than 30 years, when Bob and Elaine Lund offered to share their private collection. "To their credit, they wanted to share it with the public," Taylor said, "which is pretty unusual."

John McAlpin, registrar and loan coordinator for the Houston Museum of Natural Science, said the items are treated with extreme care. "We cannot touch the object unless we have gloves on," McAlpin said. "When displaying artifacts we can't reveal how the trick was done."

McAlpin explained the careful process of crating and transporting the delicate items. He was overseeing some of the packing on Wednesday morning at the magic museum library on Mansion Street in Marshall.

The material will be transported in an air-cushioned, climate-controlled truck with special suspension, McAlpin said.Taylor said loaning items to such a big museum gives Marshall and the magic museum exposure.

"Our name's going to be in one of the largest museums in the country," Taylor said. "The Houston museum is huge. It's a great opportunity for us."
Written by John Cox at 9:40 PM