This one slipped past me last year, but it appears a Houdini musical, Houdini, a varázslatos musical (Houdini, the magical musical) had its premiere in Hungary. I discovered the official artwork (below). But reading the comments at PORT.hu, it looks like the venue sunk this show with poor sound and parking. Said one attendee, "The actors seem to have tried to give it everything, to no avail." 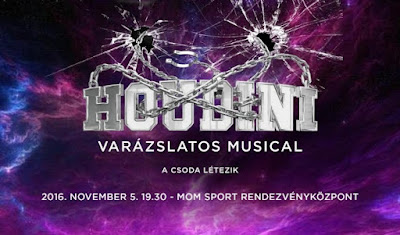 Below are links to some other Houdini stage musicals, successful and otherwise.