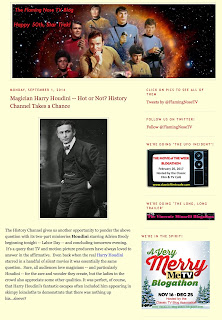 This post at The Flaming Nose TV Blog appeared back in 2014. It's a terrific post by Lisa that assess the relative "hotness" of Houdini and the actors who have portrayed him on screen.

I'm sorry I failed to link to this back then, not only because it's an excellent post, but because I like supporting fellow bloggers who share their passions and knowledge. I think independent blogs like The Flaming Nose represent what's best about the Internet, and I fear they are now being downed out by the Twitters, Facebooks, and organizational blogs that are less about sharing passion and more about spreading agendas and advertising.

Or maybe I just like this because Lisa and I appear to be kindred spirits in our affection for the 1976 TV movie The Great Houdinis. It's also interesting to hear she worked in programming at TNT when the 1998 Johnathon Schaech biopic aired, so she has an insider's take on that film.

But why am I telling you this? Click on the headline and have a read for yourself, and let's keep on blogging!