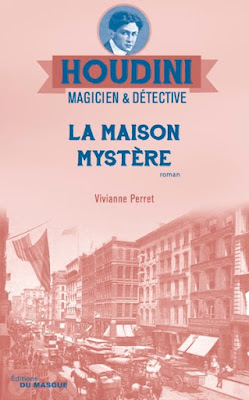 Even though I can't read French, I still look forward to each installment of Vivianne Perret's French language "Houdini Magicien & Detective" series. That's because the author sets her fictional stories within a historically accurate time and place in Houdini's career, and it's fun to see where Vivianne will send Harry next.

Now comes word that the fourth book will be set in New York in 1904, taking place largely inside Houdini's newly purchased home at 278 W 113th Street. The book is called La Maison Mystère (The Mystery House) and will be released in February 21, 2018. It can be pre-ordered now at Amazon.fr.

You can purchase all the "Houdini Magicien & Détective" books from Amazon.fr, Amazon.co.uk, and Amazon.com.