Harry Houdini's War is at peace with the facts

Big Finish has released their Doctor Who audio drama Harry Houdini's War on CD in the UK. This is the conclusion of a trilogy of adventures with the Sixth Doctor (Colin Baker) and features Houdini played by John Schwab. 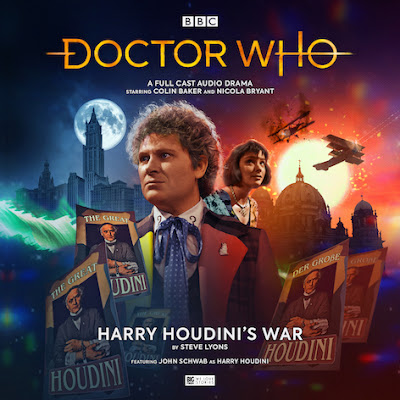 I thoroughly enjoyed this audio play, and while I don't think I'm versed enough in Doctor Who to compare it to other Who adventures, I can review its use of Houdini.

It's clear writer Steve Lyons and all involved have done their homework. Peppered throughout the production are snippets of authentic Houdini history, kicking off with the first lines of dialogue which are a recreation of Houdini's Water Torture Cell patter taken from his only known voice recording. John Schwab nicely imitates Houdini's super syllabic enunciation ("Lay-dees and gen-tell-men"). Thankfully, he doesn't keep this up or we would never get through this! Schwab's Houdini does feel deliberately contemporary (reminiscent of Michael Weston in Houdini & Doyle), but that works for the story and nicely highlights Harry as a man ahead of his time and a good fit with the Doctor.

The story opens with Houdini performing in New York City in September 1917, which is accurate (although he was only doing War benefits at this time). Houdini teaching doughboys how to escape German restraints gets a nod. His history and skills as an aviator comes into play in a major way. We also hear mention of his movie work, his handcuff escapes in Germany "a decade before", and after a Tardis time warping makes him a day older (or is he younger?), Houdini quips, "I'll have to change my birthday...again." Hey, we get that!

The CD also includes 10 minutes of interviews in which Houdini is discussed by the producer, director, and stars Colin Baker, Nicola Bryant, and John Schwab.

I'm not generally a fan of Houdini fiction, but this is a case where it is all done right. They frame their fiction with facts instead of bending Houdini history to fit their story. It's a class act by Big Finish.


You can purchase Doctor Who: Harry Houdini's War audio CD at Amazon.co.uk. In the U.S. you can buy direct from Big Finish.

Thanks to Athena Stamos.