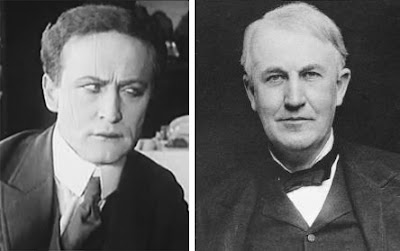 In recent episodes of Houdini & Doyle and Timeless, a fictional Houdini encounters Thomas Edison. In both cases, Houdini is hostile towards the inventor, expressing his support for Nikola Tesla who's inventions Edison was reported to have stolen and/or undermined.

Like Christopher Columbus, Thomas Edison, a great hero in his own day, has been reassessed by history, mainly because of the emerging story of Tesla, and Edison's aggressive business practices and credit grabbing. So it didn't surprise me that these shows would make Houdini an Edison foe, although I suspected in real life Houdini would have been an Edison admirer. The two men were known to correspond.

However, I recently found a clipping in the November 26, 1924 The Tar Heel that suggests Houdini might have been more in line with current thinking. Check out the paragraph below from a report on Houdini's spiritualism lecture at the Memorial Hall in Chapel Hill, North Carolina.

Tesla was not Danish, so I suspect the "Danish inventor" referenced here may be Poul la Cour, who in 1878 made key improvements to the Telegraph and competed with Edison. Or maybe Houdini thought Tesla was Danish?

Houdini's hostility might have also had something to do with the fact that Edison was a tacit believer in spiritualism. He was even said to be working on a device that could communicate with the dead.

Houdini seemed pretty fired up at this lecture. The paper also reported him as saying "The ouija board is the first step to the insane asylum" and that Sir Arthur Conan Doyle and Sir Oliver Lodge "should be locked up and kept away from society."