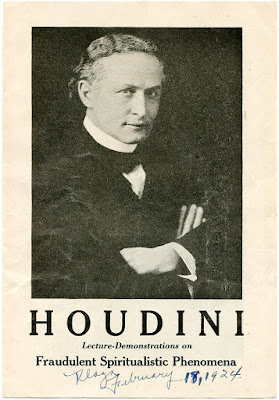 There have been a lot of interesting Houdini rarites popping up on eBay lately, including this 4 page fold-out leaflet from 1924 for Houdini's lecture on "Fraudulent Spiritualist Phenomena". Can't say I've seen one of these before.

Writing on the bottom of the cover ID's and dates this lecture as, "Plaza, February 18, 1924". The seller says he thinks this may have been for an appearance by Houdini at the Fairmont Copley Plaza Hotel in Boston.

This leaflet sold for a respectable $565.55, so it appears I wasn't the only one who hadn't seen one of these before.

UPDATE: This appears to be a lecture at the Plaza Theatre in Stroudsburg, PA.
Written by John Cox at 7:52 AM