This very uncommon advertisement for Houdini's spiritualism debunking lecture was recently listed on eBay, where it sold for its opening price of $1000. The seller states:


"Extensive research has been done on this poster and, to the best of my knowledge, it is the only example known to exist today. No one, not even the experts in the field of magic, has ever seen this poster before." 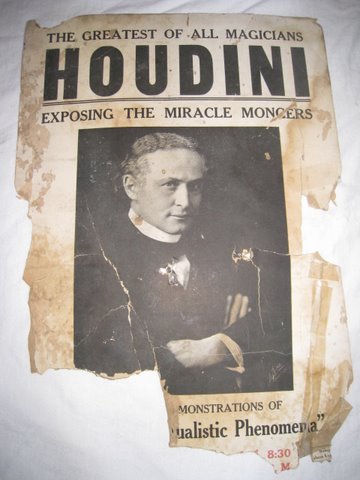 Hey, I have no argument, as I know I've never seen this. Even with the damage, I think it's a terrific piece. I even think the damage makes it more beautiful in a way. The poster measures 15 ¼” x 10 ¾”. The image Houdini used here also appeared on a larger color lithograph for his spiritualism lecture.

Congrats to the buyer of this beauty.

UPDATE: The auction listed this as 1920, but it is more likely 1924 when Houdini did his lecture tours. This appears to be from his first tour that year, which ran February and March.
Written by John Cox at 8:14 AM