French edition of '100 Houdini Tricks You Can Do' 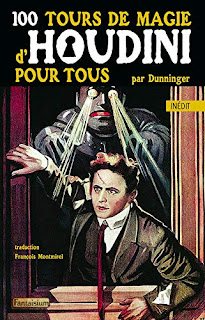 French publisher Fantaisium has released the 1954 book 100 Houdini Tricks You Can Do by Joseph Dunninger as 100 tours de magie d'Houdini pour tous. Translation is by François Montmirel.

Not sure why they decided to use poster art from The Master Mystery as cover art, but... C'est la vie.

This is latest in a series of reprints from Fantaisium. Last year they released translations of Houdini's A Magician Among the Spirits, The Right Way to Do Wrong, and Magical Ropes Ties and Escapes (see related link below). They've also released Houdini's Margery pamphlet as Trucs et Astuces des Médiums.
Thanks to Arthur Moses for the alert.